Pastor Neal has been on the church staff since May of 1996, first as an assistant pastor, then as a co-pastor in 2009, and finally as the pastor since 2013. In the subsequent years, Pastor Neal has led the church through amazing growth, the starting of new missions and outreach ministries, the acquiring of new campuses for the church and its Christian school, and the experiencing of personal revival for the church family. 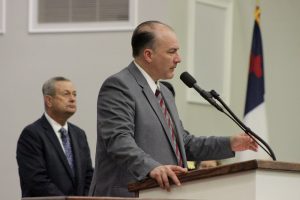 Pastor Neal is the author of several books. An Angel Among Us is a story chronicling the loss of his eight-month-old daughter Amanda and how God used this tragedy for His glory. Along with his other books Satan’s Toolbox, A Journey Through Heartache, and The Christ of Christmas, he has written many articles for multiple Christian magazines and newspapers, and his sermons have been featured on several Christian radio stations.

He has been instrumental in starting missions works such as Reaching Spanish Nations, a ministry in Central and South America that hosts preaching conferences and soulwinning outreach, and Operation Light, a church planting ministry in Africa. He has helped send out young preachers from Immanuel Baptist Church to start and pastor churches in many cities across the United States as well as multiple families serving on the mission field in foreign countries.

Pastor Neal, through his preaching and his counseling, displays the compassionate heart of a pastor, follows the true leading of the Holy Spirit, and expresses a fervent desire to see lost souls come to know Christ. It is his ultimate desire to see the greater Jacksonville area reached for the cause of Christ and for revival to come to Northeast Florida.

We realize that the first visit to a new church can be awkward and leave one feeling anxious and even uncomfortable. Our promise to you is that from the moment you arrive you will feel comfortable and welcomed.